About the Kate Mullany House 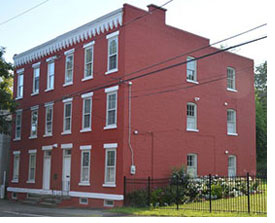 This modest three-story brick house is the only surviving building associated with Kate Mullany, a young Irish immigrant laundry worker who in 1864 organized and led the all-female "Collar Laundry Union" labor union.

Even though the women laborers of Lowell, Massachusetts and elsewhere had been organizing unions to protest working conditions and wages since the 1840s, early women's unions often only lasted as long as the particular issue under debate.

The Collar Laundry Union, unlike so many other unions, remained an organized force in the industries of Troy, New York more than five years after its inception. The origins of Kate Mullany's union date back to the 1820s, when entrepreneurs established the nation's first commercial laundry in Troy to wash, starch, and iron a local invention, the "detachable collar." By the 1860s, Troy supplied most of America's detachable collars and cuffs, employing over 3,700 women launderers, starchers, and ironers. Working 14 hour days for $2 a week, the women launderers labored in oppressive heat. When owners introduced new machinery that increased production, but worsened working conditions, a young woman named Kate Mullany organized a union to demand change. In February of 1864, Mullany and 200 other workers formed the Collar Laundry Union. The well organized union struck and demanded a 25 cent raise, and the laundry owners capitulated a week after the strike began. The Collar Laundry Union remained active in Troy, often assisting other unions, and even attempted to establish an employee cooperative.

Mullany herself gained national recognition in 1868, when National Labor Union President William Sylvis made her the first female appointed to a labor union's national office. One of the American labor movement's earliest women leaders, the home of Kate Mullany exemplifies a strong tradition of women's union activity.